I had to laugh when I thought about it. I’ve been actively involved in content marketing for 20 years. Seems like I just started. There’s something new to learn every day and content marketing feels like it’s taken over marketing. Well, essentially it has.

I remember back when just putting up a blog post once or twice per week was a novel approach to content marketing. In 2005, HubSpot came along, followed by Marketo in 2006. Email marketing was a thing, but back then we were all pretty much broadcasting about our products and how great our companies were. There was no real story, the sends were mostly predicated on new product releases or updates and features or “me, me, look at me, I’m the leader” propaganda.

Then social media came along, and you could draw an audience to your company’s content outside of those you knew in your database.

It didn’t take much to attract a crowd.

Fast forward to today and the produced content is staggering in volume. Channels have been added nearly every year and as consumers (and business buyers) became internet savvy, they wrested control away from the brands who used to decide what information they should have.

To manage all of this and continue to be competitive, content strategists needed a new way to manage content marketing. Because, along with all this growth came silos—or at least the silos became more noticeable as they became bottlenecks to the visibility we needed to get things done.

Five years ago, it wasn’t uncommon for me to work with a marketing team in one department that never spoke to or even knew the marketing teams in other departments: the social media team or the sales team or customer success teams. I’ve facilitated those introductions more times than I can count. Needless to say, there was no coordination across the enterprise, so it was common for a prospect to get barraged by unrelated, often irrelevant communications because segmentation was lacking, personas were a novelty, and a cohesive strategy was considered one-off projects every quarter.

Content operations came about based on the necessity for sanity and the quest for excellence. But also because people had become vocal about what they liked and didn’t. They no longer had to take what they could get, they could demand more, and there were companies that saw their chance to jump the shark by giving it to them. So, we had to get better at content marketing; become more purposeful.

And something else happened along the way. Content, we’ve all discovered, isn’t just a marketing product—it’s a company product. Content has become foundational for experiences. And customer experience is the new competitive battlefield.

Content operations requires we work strategically to coordinate people, processes, and technology across the organization. Why? So we’re telling a relevant story no matter if to buyers or to customers and that we’re basing each conversation and touchpoint on where they are in their relationship with us.

The issue is that things are moving and evolving so quickly—technology, channels, buyers, customers, markets—that it’s really hard to keep up. But we have to. What we need is help to speed us along the journey from content marketing to content operations so we don’t miss a step.

This is where self-assessments can be a gift we give ourselves.

Assessments have long been used for self-evaluation and a multitude of other applications. There’s something about an assessment that draws us in.

Is it the cut-to-the-chase evaluation and benchmarking against our peers?

Or it could be the anticipation of getting an answer to the question, what should I do next?

How many of you have found yourself in a situation where you know what you’re doing isn’t working or that it could be better, but you have no idea where to start, how to truly nail down the issues holding you back?

You can visualize the end state, but it’s all those pesky steps in between that seem daunting or perhaps a bit murky. And even if you “know” what you should do next, you’re uncertain just how to go about doing it. And, getting other departments involved, how would that work?

Wouldn’t you want to spend a mere eight minutes answering a few questions to learn where you are in your content operations journey and what the next best steps are for you to move to the next level of maturity and competence?

What Can You Learn from a Content Operations Self-Assessment?

You know your team has shining moments, but they’re inconsistent and you know they could be better. What if you could take those shining moments and use them as a north star to guide you to more of them?

You’ve got great skill sets across teams, but they aren’t working together in lockstep, and collaboration is feeling a bit constrained. Perhaps an approach to assessing processes and discovering how your strategy is being used by each team (and even what it’s lacking) will help everyone join in with enthusiasm.

Maybe you’ve reached that level of becoming a well-oiled machine that’s strategic, proactive, and adapting quickly as needs and markets shift. But you know there’s still more to do. Fine tuning and expanding competency across the organization can take you beyond what you visualized as your end game.

Oh yeah, I should mention, there is no “end game.”

Tomorrow, things will be different.

So, get moving now. It’s easier with a bit of help. Take the self-assessment and find out where you stand and what you can do to move up in the maturity model. The more your content operation evolves, the more prepared you’ll be when that next change comes…tomorrow.

Originally posted on Marketeer, by Kapost

Receive insights from Ardath Albee to master relevance and results with content marketing. 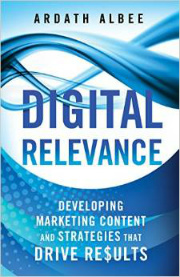 Marketing Interactions, Inc. works with B2B clients to create buyer personas and digital marketing strategies for complex sales that are compelling, highly leveraged and, most importantly, designed to engage prospects across the entirety of the buying process – what Ardath Albee, CEO, calls The Continuum Experience.